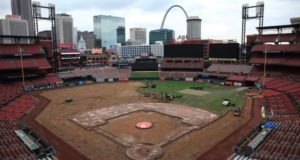 It seems every other day there’s a newer version of technology available or another update to download: phones, computers, cars. We update and upgrade so constantly without a second thought. But what about sports fields? Aren’t those “one & done?”

Hardly.
Good managers know how much work is involved in keeping fields up-to-date. And when there are superior technologies or materials available, it’s vital for the quality of the sports that take place on those fields to take advantage of those upgrades.

When we began field renovation talks with the St. Louis Cardinals, we had our work cut out for us. We were essentially taking the field from “iPhone 4” status to “iPhone 7” capabilities. We collaborated with Cardinals’ head groundskeeper Bill Findley, his assistant Justin Scott, and head of operations Joe Abernathy to determine what could and should be upgraded: management technology, materials and equipment.

At first glance, Busch Stadium didn’t appear to need repair. But just like with a phone, there comes a time when updates and improvements are inevitable. Some of the best in the world, Busch Stadium’s staff were eager to correct all known problems that had accumulated over the past 11 years to make the field easier to maintain, optimize play on the field, and install the most cutting-edge tools, technologies and materials.

The Cardinals were going to host the NHL Winter Classic, which gave us a perfect opportunity to combine the renovation with work to be done for the classic. However, the timeline would be tight, so planning was vital. We could not start the project until the Cardinals’ season ended. This meant that all plans needed to be solidified well in advance.

Several issues that needed to be addressed were:

The hydrophobic rootzone. The sand had become hydrophobic over time, and infiltration rates had decreased to the point that standing water remained on the field after a rain. The rootzone depths and gravel layer also varied throughout the field, making it hard to manage cultural practices and moisture levels.

The infield’s slope caused runoff. The height and slope of the infield and foul territory created runoff that washed out the warning track.

Asymmetry of warning track edges. Due to years of changes to the field the track edges were asymmetrical and no longer matched the wall.

To get to the root of how to optimize the field in our short timeframe, we needed to identify and plan for as many conditions and corrective actions as possible beforehand. Without substantial as-built drawings, we did an in-season, non-disruptive survey of field conditions with Ground Penetrating Radar (GPR). GPR uses radar to generate 3-D imaging of what’s below the surface. It’s like taking an X-ray of the field to a specific depth: in our case, 4.75 feet. The data can be displayed, rotated and sliced into 2-D and 3-D images of what’s beneath the turf to better understand the underground construction, geology and hydrology.

These images helped us determine subgrade adjustments, depth of materials to replace, and areas that needed drainage work. For example, we saw rootzone depths varied from 9-14 inches across the field, as did pea gravel depths. Thanks to the images, we saw exactly where to look for grade and drainage problems even before removing grass. We identified the drainage lines, finding some that had settled and needed repairs, plus areas that held water and should be checked during excavation.

Initiating upgrades from the roots up

Since rootzone failure was the main reason for the field renovation, designing, sourcing and blending a quality rootzone was top priority—the controlling element of the planning process. We wanted to create a stable mix, with a coefficient of uniformity between 2.5 and 4.5 that was free draining and cost-effective. To achieve this, the Cardinals and our staff spent countless hours contacting suppliers, collecting samples for analysis and evaluating the data. We brought on consultant Norm Hummel to aid with the design and evaluation of test data, with testing done at multiple labs to compare and verify the results.

After several attempts and eliminations, we finally reached a perfect mix: a 90/10, produced by Madison County Sand, which combined Dakota Peat and a blend of two sands that had run through the classifier together. The rootzone’s uniformity coefficient was 2.6 and its infiltration rate was 22 in/hr. We tested and tweaked during the production process to stay within tolerances and, when installed, the final product performed exactly as we’d hoped.

Field design and construction with the 3-D Robotic Total Station. We used a Topcon Robotic Total Station unit for the entire project, from design to completion. The unit collects three-dimensional data so every point on the field has a longitude, latitude and elevation (x, y, z coordinates). We surveyed existing field conditions and input them into design software.

Using the data we collected and the wish list from the grounds crew, we made changes to the field, which could be adjusted as needed throughout the project. For starters, we lowered the infield by 4 inches and made the warning track the same elevation around the entire field. We used software, which automatically adjusts all elevations to create smooth contours and transitions from the infield to all points around the warning track. We then loaded this data into a handheld unit we used to check field elevations and locations.

This was essential during demolition to make sure we took out enough material to accommodate the new pea gravel and rootzone depths. We used the handheld unit to verify the exact location and depth of the drain lines and irrigation as they were repaired or installed. The Total Station Unit is also used for all grading, paired with the grading tractor’s on-board computer to control the box blade. So regardless of where the grading tractor is on the field, it knows both its own precise location, as well as the elevation it should be at.

While a laser box is 2-D, knowing which elevation to be at (but not so much where it is on the field), the 3-D box can go anywhere on the field and always be at the designed elevation. Therefore, the 3-D box grades the finish surface perfectly, reflecting both the subgrade and gravel layer. In fact, for future renovations or field repairs after events, the file can simply be loaded into a grading tractor to restore any point on the field to its designed elevation. The finished surface is as smooth and transition free as you can get.

Having taken images of the field with the GPR to show us what was beneath the surface, we removed the field without disturbing any more of the sub-grade than was necessary. We were able to salvage much of the drainage system and make repairs in any areas that weren’t working properly.

We used a series of excavators and dump carts to remove the field, staying on top of the old field while removing to protect the drainage system and sub-grade. The total station was used to establish sub-grade elevations for excavation. The material was hauled to the parking lot and then loaded on semis to haul off site. The field removal took 5 days, totaling nearly 400 loads of material hauled off site. To get to the correct depth in some areas, we had to remove remaining pieces of the old Busch Stadium using concrete saws and excavators to break up the foundation. Since we were lowering the infield by 4 inches, we harvested and stockpiled the DuraEdge (engineered soil) during demolition. We removed 4 inches of base material, formed the infield, and then added the DuraEdge back to the infield, finishing the surface by working new material into the old.

Overall, the drainage system was in good condition. Areas the GPR detected that had potential drain line problems did need repair. Settled lines needed to be raised, some lines needed to removed and reinstalled to create positive flow to the collectors, etc.

After repairs, we re-introduced water to the lines to ensure everything worked and flowed properly. The stadium has a SubAir system that is currently nonfunctioning; therefore we checked all connections and repaired lines to facilitate future use of the system. We used the Total Station Rover to verify and document all lines and repairs.

When we removed the old field, one of the first things we did was uncover the zone lines as they come out of the stadium and onto the field. Based on what we uncovered, the irrigation system ended up needing a complete upgrade.

Busch Stadium has a single valve bank inside the stadium grounds crew shop, from which all the zone lines run to their respective field zones. We discovered all of these lines were 2-inch PVC or smaller. Based on design calculations, these should have been 2.5- to 3-inch lines to allow for adequate flow and adherence to 5 feet-per-second velocities.

So, we initiated the irrigation system upgrades, which included:

Moving to the Baseline cloud-based system allows for monitoring of the field and operation of the irrigation system from any computer or mobile device. Whether you’re standing on the field using your phone or half way around the world you are connected to your field.

With repaired drain lines and a complete irrigation system, we put everything back together. We formed the infield and warning track to proper elevations for the sake of accurate transitions and clean lines.

We set irrigation heads in position/to-grade using the Total Station Rover. We brought the subgrade to-grade, and then installed a 4-oz. geotextile to prevent subgrade contamination of the gravel.

With the Total Station System, we could grade the base, set the offset 4 inches higher in the computer to grade the gravel layer, then raise it 10 inches to grade the surface. Each surface will perfectly reflect the one below it, and material depths will be consistent throughout the entire field.

We added pea gravel to a 4-inch depth. The rootzone was installed at a 10-inch depth. The irrigation system was run constantly to moisturize and firm the rootzone. Once the field was to-grade, we installed a 6 oz. white geotextile to retain moisture and stabilize the sand rootzone during the Winter Classic.

Final touches were put on the field in late February, and the field will be sodded using sand-based sod cut with a 1-inch profile.

Steve Bush, CSFM, is an STMA Commercial member and president of Bush Turf, a leader in the athletic field construction industry. Follow Steve on Twitter, @BushTurf.