An all-Deere fleet helps a renowned general contractor stay on top of his game.

The rain is relentless, but so too are owner Steve Bush and his dedicated crew. They’re only a few soggy days into their latest project at the Kansas City Royals’ Kauffman Stadium, and already a quarter of the field is up ‘n’ outta there. And while this seems fast-paced to an outsider, the job is a changeup for the crew. “The Royals just wrapped up their season, so technically we have until spring,” Bush elaborates on the project schedule. “A lot of times we’re turning jobs around in a day or less, or cranking out multiple jobs in a week, so this is a nice change of pace.”

THE LAY OF THE LAND

Most often working on baseball and football fields, Bush’s projects vary in scope and complexity, and on this job, there is plenty to do. “This is a complete renovation of the field. Over time, these fields mature, and even though they look beautiful to most people, the roots start decaying and plugging the growing medium, so the water doesn’t drain properly and the overall field is not as healthy.” This makes it a challenge for the groundskeeper to manage. “Our job is to remove the entire root zone — nearly 10,000 cubic yards of material — regrade the field, put in an updated irrigation system, and lower the field. It has quite a bit of crown in it — that’s the way fields used to be built; the newer fields are almost flat.” 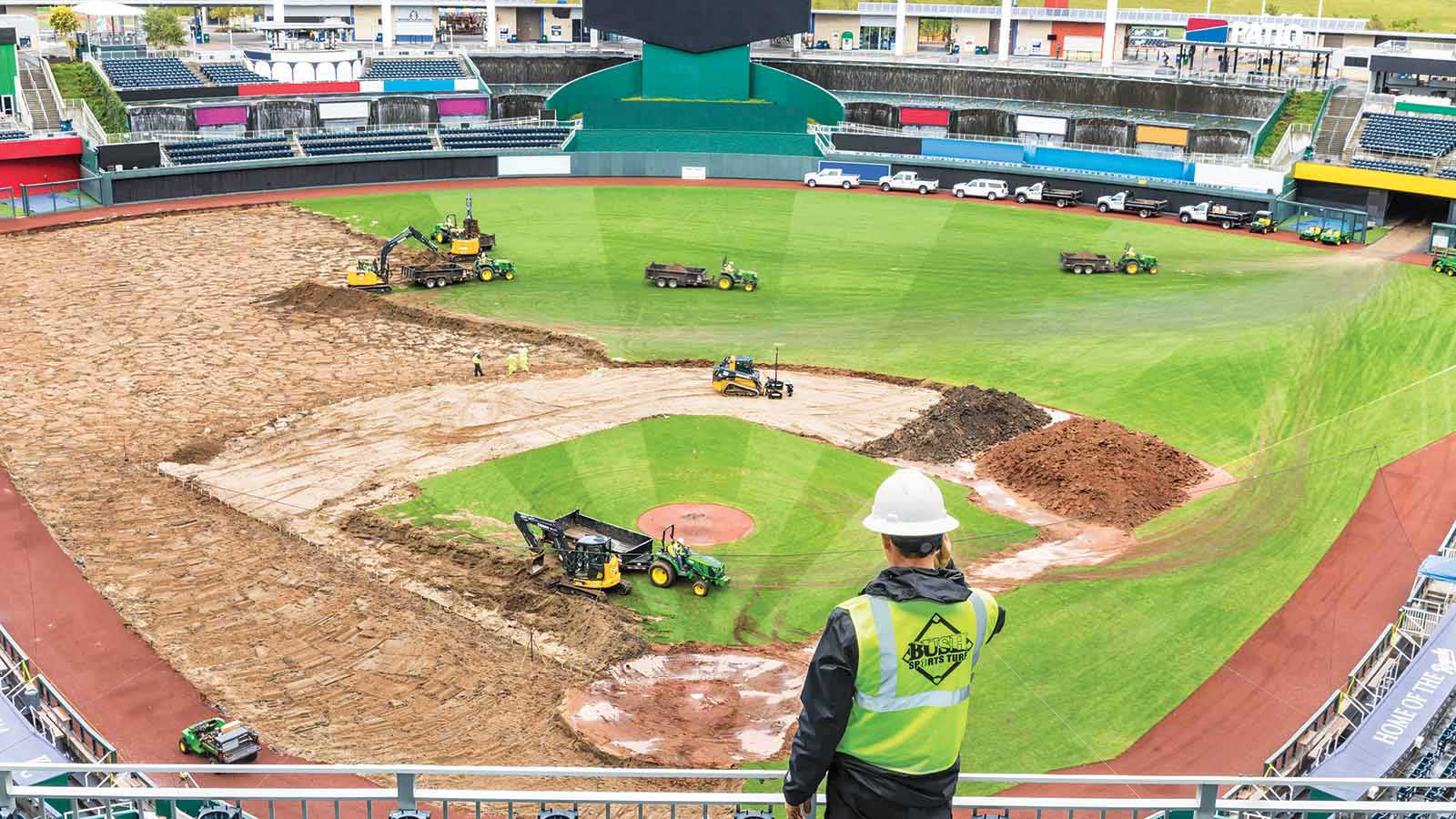 In addition to multiple John Deere 85G Excavators, a 624K Loader, and a fleet of compact utility tractors and Gators™, Bush knocks it out of the park with the help of a 50G Excavator and a 333G Compact Track Loader. “The 50G is one of the most versatile tools — I don’t know how a landscaper could operate without one. And the 333G is amazing as far as power and versatility. It’s like a small bulldozer, but with much more capability. We use it for drilling holes, loading and unloading trucks, and even grading with our robotic total station blade.” Working for the sports industry, it’s not too surprising the uniformity of Bush’s all-Deere fleet goes a long way toward impressing customers. “A lot of times we’ll send the equipment a couple days early — when we arrive everyone is just in awe. Deere equipment actually sells the job before we even start. A lot of our competitors show up with different brands and a variety of colored equipment. We show up with strictly Deere from beginning to end, and that quality equipment goes a long way in building trust in the quality of our work.”

Eager to cheer Bush and his team on is renowned Royals groundskeeper Trevor Vance, who trained under the illustrious George Toma, the undisputed master of groundskeeping in the sports world. “We’ve used other contractors in the past, and throughout the country there is no one better,” Vance attests to the professionalism of Bush and his team. “This field is our baby and we are very sensitive to it — our jobs are at stake for the work he is doing. There has to be a trust factor, and he has earned it.” It probably doesn’t hurt that Vance is a Deere fan himself. “Our whole fleet is Deere, top to bottom. Always has been, and as long as I am here, it will stay John Deere.”

FROM THE FARM LEAGUE

With such success and high praise, one would think Bush had his eye on this type of work from a young age. Lucky for you, the truth is far more interesting. “I went to school for agronomy and planned to be a farmer, but that market tanked in the mid ’80s, so my wife and I got into landscaping. I bought a grass seeder and was seeding old ladies’ yards until I heard John Deere was going to build a golf course. I started driving out there every day and finally found a guy with the PGA® and told him I could help build the course. He said to give him a quote, so that meant I had to go to the library and learn how to build a golf course first.”

“A few weeks later he called me up and I was hired. I researched some more and then built TPC at Deere Run, which launched us into sports. Next, we did a job at Kinnick Stadium for the University of Iowa, and eventually we got in with the Los Angeles Dodgers, which opened the door for more professional sports fields.” With jobs all over the country, Bush appreciates the robust Deere dealer network. “They have been super to deal with. Great on sales, great on support. If we need to rent extra machines for a bigger project, they will put us in those machines. If we need a part, we’ll almost always get it by the next day. It’s been a great working relationship.”