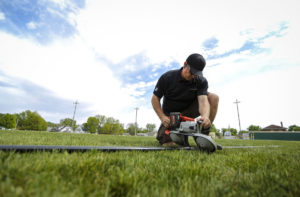 The first Iowa-Illinois college football game was played there. So was the first NFL game — between the Rock Island Independents and St. Paul Ideals.

In the 1960s, the popular World Fast-Pitch Softball tournament called Douglas Park home, as did countless high school baseball stars from Rock Island and Alleman over the years.

Despite all that history, the park fell into disarray. It has not been used all that much in recent years other than by the Quad-City 76ers, a local semipro baseball club, and Rock Island’s freshman baseball team.

But starting Tuesday, that’s all about to change. Rock Island and Alleman will square off in the first game at the Douglas Park baseball field since its renovation.

The improvements are phase one of three planned for the park. The renovation of the main baseball field will be just about completed Tuesday and debut with the Pioneers and Rocks playing under the lights at 6 p.m. Part of the first phase also calls for a small playground near where batting cages once stood down the left-field line.

The diamond, which includes a new grass infield and outfield, a new scoreboard, an irrigation system and covered dugouts, was redone at a cost of $125,000, all from private donations. The playground, which has yet to be started, is being paid for by $50,000 in gaming funds given by the city of Rock Island.

The upgrades may have taken a long time to get to the plate, but thanks to some “small ball,” it’s underway.

When the Douglas Park project originally was planned in 2007, the estimated cost was $1.6 million. The plans included a renovated main baseball field, concession stand, a softball/baseball field that also could be used for football and soccer, a small park and a renovated parking lot.

The park board did not have the money for that. The Friends of Douglas Park, in operation for more than 10 years, however, never gave up.

Led by Kevin Corrigan, the longtime manager of the 76ers, they kept pushing. When John Gripp became Rock Island Parks and Recreation director about a year ago, it finally had its footing.

“John Gripp is the catalyst for the whole thing,” Corrigan said. “We are grateful that the new leadership of the park board shared our vision.”

Phase three will focus on the interior of the park with bump-outs for benches and seating while also redeveloping the former firehouse on 9th Street and 18th Avenue, on the southwest corner of the park, as a dual-purpose museum — one dealing with the history of firefighting in Rock Island, the other telling the story of Rock Island and its place in NFL history.

Gripp, who like Corrigan played at Douglas Park in his youth, had no trouble getting behind the project.

“I grew up in the western side of Rock Island, and this is my hometown,” said Gripp, who had been working at the park board for 17 years. “It’s time we started utilizing resources to the best of our ability. And when we come up short, we need to find friend groups. We need to find grants, other sources of funding to put these projects over the edge.”

Gripp sees the whole project in a much larger picture, too.

“Douglas Park is an entry point to our city and frankly needs to look better,” he said. “I believe if we get this done and create a destination for not only the athletic teams but the community to come out and enjoy, it’s just going to be great for everyone involved.”

Corrigan is pleased to see phase one almost finished. He realizes the park has a ways to go but points out it’s come a long way in just one year.

“I am just thrilled,” he said. “I have been hanging out at that place since I was about 6. It will give me a reason to hang out a few more years, that’s for sure.”