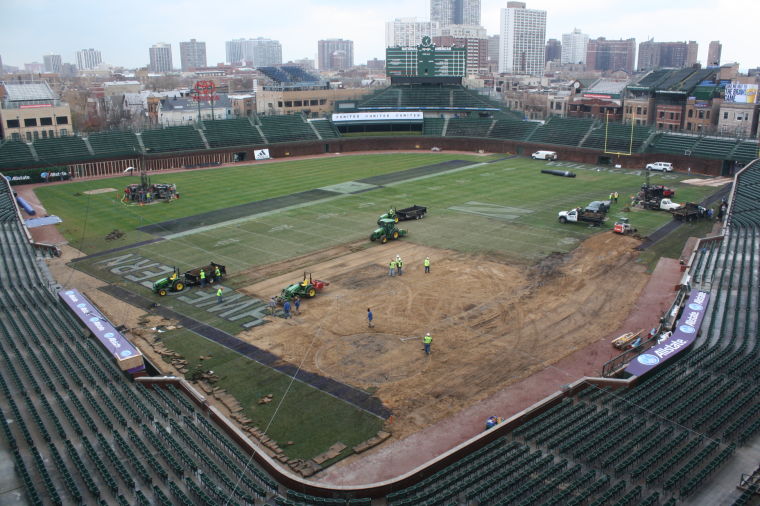 This comes in the wake of the University of Illinois and Northwestern University playing the first college football game at the baseball park since 1938. But that’s not why Mr. Bush and his staff are rebuilding the entire field.

“It’s the whole process,” Mr. Bush said in a phone interview from Wrigley Field. “There was a heavy layer of sod placed over the infield to play the college (football) game. That’s being replaced. We will get the infield complete by Wednesday (today) and finish the outfield next week.

“It is a new field. It was going to happen no matter what, but they decided to play a historic football game before we got to it.”

Mr. Bush said a state-of-the-art GPS system, one that recalls every nook and cranny of the Wrigley playing surface, allows his company to put everything back where it was.

“We have some of the most sophisticated field-mapping and grading equipment in the sports-turf industry,” Mr. Bush said. “Part of the reason the Cubs selected us to help with this renovation is because of the technology we have.

“We came in before they converted the field (for football) and mapped the surface with all the locations of bases, baselines and irrigation. This allows us to put the baseball field back exactly as it was removed, only in better shape.

“Being a historic site, this is important. We put the file we created into our grading equipment and can replicate the old field with millimeter accuracy. We also did testing of the infield soils and are using this opportunity to install a much-improved infield surface for the Cubs.”

A University of Illinois graduate, Mr, Bush said there is a sense of pride in getting to work on the field that saw his Illini defeat Northwestern Saturday past.

“It’s cool as an Illinois alum to be a part of the historic, one-way college football game,” Mr. Bush said. “And the opportunity to work at the most storied of all baseball fields.

“We have been working with Roger Baird, the Cubs’ head groundskeeper, for quite some time and believe we have just what the Cubs need.”

With daytime highs in the 30s and nighttime lows in the teens, Mr. Bush said the dirt work on Wrigley Field must be done by today.

“You can put down sod in cooler temperatures, but cannot do anything with dirt when it freezes,” Mr. Bush said. We’re under the gun a bit, but we’ll be OK.”

Though Mr. Bush appreciates all the athletic fields his staff have brought to life, this job tops them all.

When asked if he’s a Cubs fan, Mr. Bush laughed.