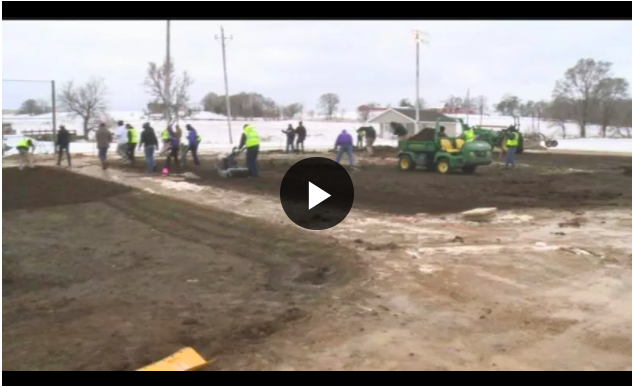 An eastern Iowa icon is getting back in the game.

More than 50 volunteers braved the unseasonably cold temperatures to repair the Field of Dreams.

“So what we’re doing in the background, we’re removing the damaged sod, we’re regrading the field to fix the ruts where it got tore up,” said Steve Bush, owner of Bush Sports Turf.

The iconic field in Dyersville was damaged in January after someone drove on it, causing deep tire tracks on the grounds.

Baseball fans across the country responded showing love and support with donations to help rebuild the field.

Denise Stillman, the owner, is grateful. “Just seeing this crew of guys come out to repair the field, some have come as far as three hours away this morning  in the winter and rough roads, it’s just amazing.”

“The thought came to mind, let’s call the minor league teams in Iowa and see if we can pick a day where everybody brings their grounds crew and a couple staff members in, and try and fix it for them cause they really don’t have a budget for that here,” said Jeff Lantz, senior director of communications for Minor League Baseball.

For added security, a surveillance camera system has been added.

Stillman said they’ve put damage, behind them. “In life, as in the movie, everyone deserves a second chance.”

The Field of Dreams has yet to find out the total cost of the damage, but it’s possibly in the thousands. they’ll be able to get a better idea once they check the underground sprinkler system.