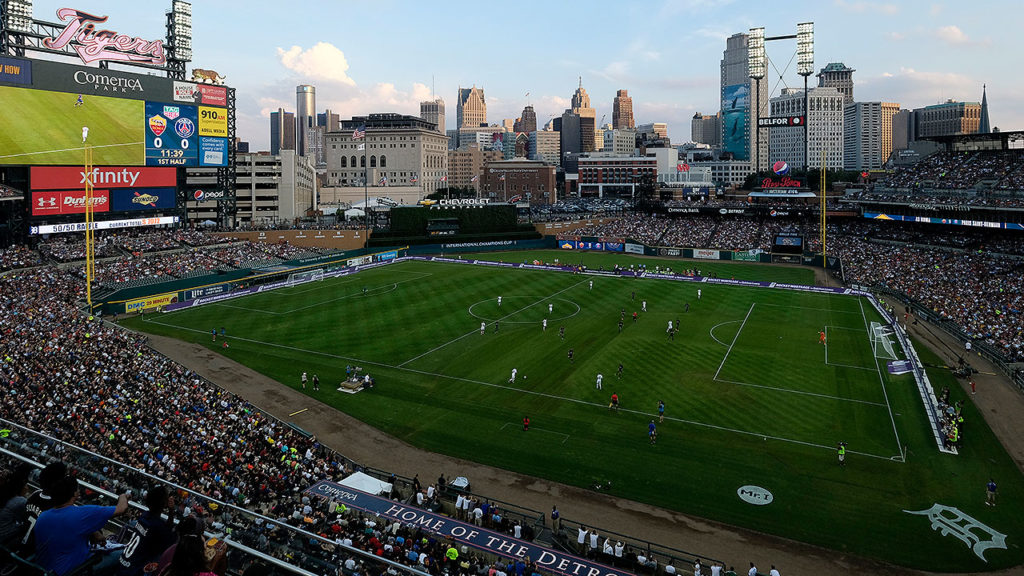 DETROIT — Comerica Park underwent quite a transformation over the past week, from a concert venue to a baseball stadium to a soccer pitch. In its latest form, the park hosted a 2-1 win (penalty kicks) for Paris Saint-Germain over AS Roma in an exhibition game on Wednesday.

It was the first professional soccer match in the history of Comerica Park, which opened in 2000, and part of the fifth-annual International Champions Cup, a tournament of pre season friendly matches between European clubs. The tour has stops in 11 U.S. cities (of which Detroit was the first), as well as in China and Singapore.

“I enjoyed it very much,” Roma coach Eusebio Di Francesco said. “The public was great, however, once the match started, I focused on the game and on the pitch, which was a good soccer pitch, I have to say.”

Comerica was the venue for a Metallica concert on July 12, then hosted three games between the Tigers and Blue Jays from Friday to Sunday, before Roma and PSG played Wednesday. The goals were set up in left field and behind the first-base line. The pitcher’s mound was lowered and covered with grass, as was the rest of the infield, while the warning track surrounding the field remained uncovered.

“There was some parts where it was obvious that they made adjustments for the field,” PSG coach Unai Emery said. “But you can tell there was a lot of work put in to make it the best condition possible.”

Roma has a history of playing at baseball stadiums, having won at Busch Stadium last year and Fenway Park in 2014 and ’12. PSG is the two-time reigning champion of the International Champions Cup.

A crowd of 36,289 took in the back-and-forth match, buzzing for every shifty deke and shot attempt. Many fans wore soccer jerseys, though many represented teams other than the two on the field.

A general passion for soccer was evident among those who attended, which is a positive sign for Detroit as it vies for an expansion franchise in MLS. Detroit, which has a fourth-tier pro team, Detroit City FC, is one of 12 cities vying for four spots in MLS’s long-term expansion plan.

“I think this market would be great for an MLS team,” said Charlie Stillitano, the chairman of Relevent Sports, which organizes the International Champions Cup. “I think they’ve shown that.”

For a night, a crowd in downtown Detroit caught an up-close glimpse of soccer at its highest level. The players on the pitch looked out at the unique surroundings of their playing surface and put on a show.

“We’re very thankful and very appreciative,” Emery said. “We know that baseball is a very important thing in this city, and we enjoyed playing in this stadium.”